The first new class of memory in 25 years

1989 was a good year. Gas was less than a dollar per gallon; Intel unveiled the 486 series CPU; the Berlin Wall came down; and Nintendo released the first Game Boy. There was also a milestone you may not remember: 1989 was the the last time the semiconductor

industry introduced a major new memory architecture. For the past 25 years, NAND flash memory has served us well. Though you are not likely to still be playing your original Game Boy, you are definitely still using NAND. This decades-old non-volatile rewritable memory architecture is a primary building block for devices such as USB flash drives, SSDs, and your cell phone. This is pretty impressive for technology that was introduced in the same year that Ronald Reagan moved out of the white house!

Given that so much time has passed, you’d imagine not only that it’s time for a newer architecture, but also that it had better be impressive. Never ones to back down from a challenge, Intel and Micron have been hard at work on a brand new class of memory which they are calling 3D XPoint™.

On paper, 3D XPoint (pronounced “cross point”) does not disappoint, with performance landing somewhere between system DRAM and Solid State Drives. Intel and Micron report a 1,000x improvement over NAND in both speed and endurance, plus a 10x improvement in density over conventional memory. Although it’s not as fast as volatile system RAM, 3D XPoint is much denser, plus your data does not go away when the power is turned off.

The incredible performance increase over NAND-based SSDs is facilitated by a three-dimensional architecture, where memory cells sit at the intersection of word lines and bit lines (the crosspoint, if you will). This unique structure allows each cell to be individually addressable. As a result, data can be read and written in much smaller chunks than the 16K blocks of a typical NAND architecture. Though Intel and Micron have yet to release specific figures, the efficiency of this new architecture should bring about significant power savings, as well.

A third layer of system memory 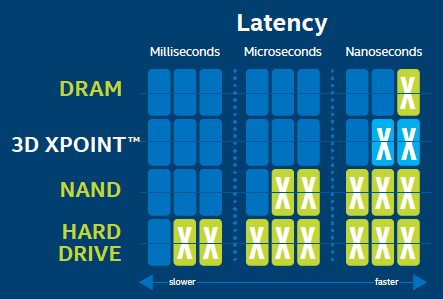 At the recent event where Intel and Micron unveiled 3D XPoint, they shared little detail about how the technology will find its way into the products the industry will bring to market next year. Industry pundits have expressed a range of hypotheses on this. They tell us to expect various form factors, such as NVDIMMs that will plug straight into the motherboard, NVMe-style devices that run on the PCI bus, and possibly even self-contained drives that would run alongside existing SSDs.

The most obvious use case calls for 3D XPoint to be employed as an additional layer of cache, speeding up applications and databases. However, the non-volatile nature of 3D XPoint provides an enormous advantage, since the data it contains does not need to be replicated at lower layers, such as hard drives or SSDs. This could enhance the performance of databases, as active data can be stored in the middle layer, while less frequently accessed data is written to the slower bottom layer (SSD or HDD). This could be a boon to research facilities, as extremely large data sets could be analyzed in real time. On the consumer side, one eventual use case could eventually have 3D XPoint employed in gaming consoles. Game levels and data could be stored in such a way that the end user never perceives any loading times. Another use case has 3D XPoint replacing NAND in portable and embedded devices, leveraging the incredible density and endurance of the new architecture.

Since this is an entirely new classification of memory technology, there are sure to be future applications of 3D XPoint that we cannot yet imagine. Meanwhile, starting next year, your next Pogo system will have some exciting new configuration possibilities. Stay tuned to www.pogolinux.com for details.

To learn about how Pogo can help you tackle the challenges your organization is facing, please call us at 888-828-POGO, or email sales@pogolinux.com.

3D XPoint is a trademark of Intel Corporation in the U.S. and/or other countries.